Following consultation and collaboration with Light Regional Council to establish Development Approval guidelines generally, fundraising and testing of numerous materials the actual work got underway. It was decided to deliberately keep initial mural sites within, or very close to Main Street – to create a focus area for the foreseeable future and then all being well, to move outside that precinct.

The largest of the initial murals was the front of the Post Office building. The concept was drawn up by Kapunda Graphic Artist Danny Menzel (DMGraphics), depicting the original Post Office building in the town, postie, bicycle, post box etc from a former era.

The mural was painted off-site on aluminium panels over several months, with many volunteers (artists and non-artists) assisting with the primary painting. Finishing touches done by Danny Menzel. 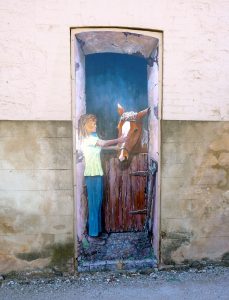 At the same time three doorways to the (former) stables on the North Kapunda Hotel building were also painted by Kapunda artist Mal Craig, with a theme of the former stables interior. Mal later painted murals on the blocked windows between the doorways in a similar manner.

The smallest site in this series of three was the old Stable door on the Metropolitan Fire Service Building.

Kapunda artist Bill McGowan created the concept, a depiction of the stable door with horse, bucket and fireman in vintage fire uniform. The painting was completed offsite by Bill McGowan and Maxine Donald.